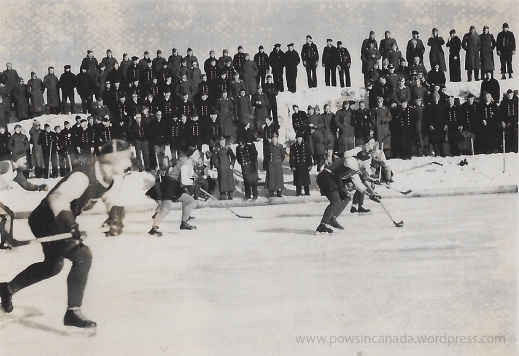 On first glance, it may seem a simple photo of a hockey game and soldiers looking on. But on a closer look, something stands out – the soldiers are not Canadian. They are German. This picture, which I was very pleased to add to my collection, is a relatively rare photo of German POWs at Camp 23 (Monteith) playing hockey with their comrades watching from the sidelines. Considering tomorrow is Hockey Day in Canada, what better time is there for delving into a little history about German POWs and Canada’s national winter sport.

With thousands of young, athletic men interned in Canada during the Second World War, sports became an especially popular and important way to pass the time. Prisoners in most internment camps set up their own teams and leagues and began playing football (soccer), baseball, volleyball, basketball, tennis, and – you guessed it – hockey.

I have no record of how many POWs had played hockey before coming to Canada but hockey was an established sport in Germany, with the country taking the bronze medal in the 1932 Olympics. One also has to remember that many Canadians were interned in the early years of the war due to their status as “enemy aliens.” It is quite likely these men shared their skills with newly-arrived internees and EMS from the United Kingdom.

As for the skates, sticks, pucks and other equipment, most was provided by aid organizations, most notably the War Prisoners’ Aid of the YMCA. This organization dedicated itself to improving the living conditions of POWs interned on both sides and did their utmost to meet the recreational, educational, and religious demands of POWs. The War Prisoners’ Aid and the International Red Cross began supplying generic articles to improve the lives of those interned in Canada but also allowed POWs to make specific requests. For example, in late 1940, among the articles requested by internees at Monteith were lights for their Christmas trees, twenty-four pairs of stakes, and twenty-four hockey sticks.

The organization did have a budget to purchase items – ranging from ping pong balls to pianos – but also relied on donations. In an early report of the War Prisoners’ Aid, director Jerome Davis remarked,

One Canadian manufacturer out of the generosity of his heart, contributed two hundred pairs of skates. The result was that we were aided in building skating rinks in almost every prison camp in Canada. later, the Canadian Government took pictures of these rinks and some of them were sent to Germany. Therefore, the act of the Canadian business man who desired simply to do a Christian act for imprisoned soldiers – men who are not criminals but simply soldiers out of luck had its repercussions internationally and the Canadian business man may actually have done more to hep the British prisoners than he could have by sending in skates directly to them.

As the following image, given to Dr. Boeschenstein of the War Prisoners’ Aid, demonstrates, the equipment was greatly appreciated and quickly put to good use.

Roughly translated, the poem reads:
When cold comes with ice and snow,
YMCA thinks of the POW
With YMCA’s help here on the spot
One Plays Ice Hockey, Canada’s Sport

By December 1942, the War Prisoners’ Aid reported that every internment camp in Canada had, among other things, skates and a skating rink. In Camp 23 (Monteith), for example, POWs flooded the soccer field in the winter months and turned it into a skating and hockey rink while POWs at Camp 44 (Grande Ligne) converted their tennis courts into two skating rinks, one for hockey and the other for “fancy skating.”

Limited for recreation in the winter months, these skates were in especially high demand; at Camp R (Red Rock) in March 1941, the skating rink was in use throughout the day but, only having thirty pairs of skates for 1,100 internees, the internees had to sign up in advance. Other camps were better-equipped; by 1943, Camp 21 (Espanola) had two skating rinks and 500 pairs of skates.

The skills of those involved varied, as one report from Camp 44 (Grande Ligne) suggests: “One or two of the prisoners were quite good, but a number of them had not yet found their ice legs, and were falling around to the amusement of the on-lookers.” 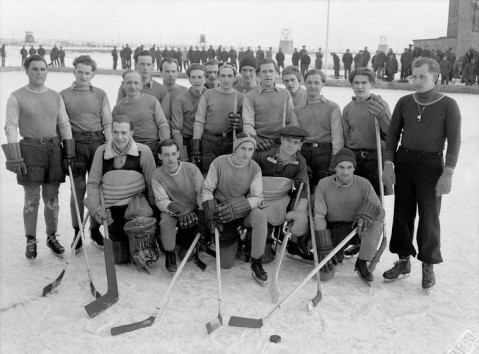 It was not only internment camps where hockey was popular. Prisoners in some of the almost 300 small, isolated labour projects also took up the sport. Those who found themselves working as woodcutters in the Northern Ontario bush frequently requested skates and hockey equipment to help pass the long winters. Fortunately for them, the pulpwood industry relied on waterways to move logs and most camps were located on the shores – or at least nearby to – streams, rivers, and lakes. Once cleared of snow, these frozen waterbodies became natural ice rinks.

Whether or not the POWs kept skating when they returned to Germany, I do not know. But I’m sure many brought back fond memories of their time in Canada playing that “good ol’ hockey game.”

The sketch above was submitted to War Prisoners’ Aid for consideration of being printed as one of the annual Christmas cards produced by the organization and distributed to PoWs in Canada. The artist, Rudi Boege, was a civilian internee at Camp 70 (Fredericton, NB) and, as the spokesman described, one of the most gifted artists in the camp.

The design shows PoWs gathered around a bonfire and the campleader explained it had special meaning to the internees at Camp 70 for every Christmas eve, the internees lit a bonfire on the parade ground.

To my knowledge, the card was never produced. The War Prisoners’ Aid instead settled on a card depicting Camp 133 (Lethbridge, AB).

Merry Christmas to all my readers and best wishes in the new year!