Today, I received a selection of records and photographs belonging to a former PoW, Leutnant Bernhard Brockmeier. With today being the 72nd anniversary of the D-Day landings and knowing little about the contents of the records or Brockmeier’s wartime career, I was quite surprised at what I found.

Seventy-two years ago today, on June 6, 1944, Lt. Brockmeier was among the thousands of German soldiers manning defenses along the Normandy coastline. The thirty-year old lieutenant was likely a member of the 716th Infantry Division stationed in the area around what would soon become the Canadian landing area, Juno Beach.

Sometime after the Canadian landing, Lt. Brockmeier was captured near Courselles (Courseulles-sur-Mer), likely by members of the Royal Winnipeg Rifles or the Regina Rifle Regiment. Sent back to the beachhead, he and fellow PoWs were herded together to await their evacuation from the beachhead. Loaded onto landing craft and then onto a troopship, he was then taken to the United Kingdom. 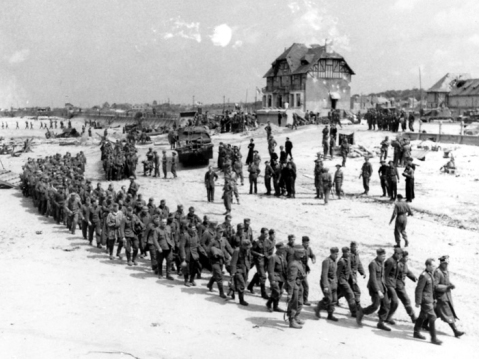 In May-1946, he was shipped back to the United Kingdom where he spent time in a number of different camps and was employed in agricultural work in the Summer of 1947. In September 1947, he returned to Germany.

Juno Beach: Then and Now

To mark the 70th Anniversary of the D-Day landings, here is one of the projects I have been working on.

Earlier in the year, the Laurier Military History Archive released thousands of aerial photographs taken during the Second World War. Among the collection was a number of photos taking during reconnaissance missions leading up to June 6, 1944. The following series shows Juno Beach as it appeared on June 4, 1944 and how it appears now.

Click on the image to view the full size. If you look closely, you can see some of the German defensive positions and obstacles of the Atlantic Wall. Note that the Archive’s online collection only includes medium-resolution photos so I apologize that I cannot zoom in any closer at the moment.

The first two photographs shows a map of the British and Canadian landing beaches (West to East – Gold, Juno, and Sword). The second photograph shows which Regiments landed at Juno in the early morning of June 6, 1944.

The following photographs show the Canadian landing zone from West to East.

The Royal Winnipeg Rifles and a Company of the Canadian Scottish Regiment landed here in the morning of June 6, 1944.

Courselles-sur-Mer in the middle. The Royal Winnipeg Rifles landed at the left and the Royal Regina Rifles on the right.

Bernières-sur-Mer in the middle, the objective of the Queen’s Own Rifles of Canada. 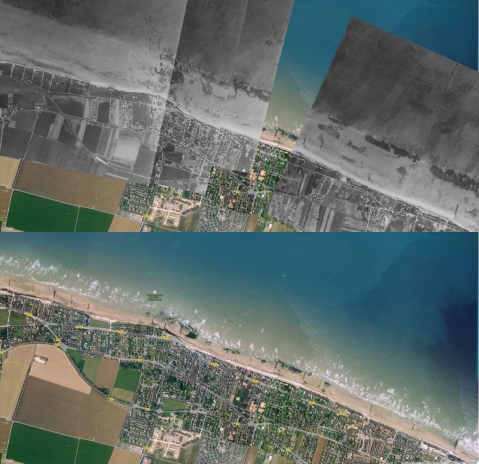 Saint-Aubin-sur-Mer, the eastern-most part of the Canadian landing beaches and the objective of the North Shore Regiment.

For those who have visited Juno Beach, you may recognize this area. The middle of the two photographs shows the location of the Juno Beach Centre.

Courselles-sur-Mer. Note the landing obstacles along the coastline in the 1944 photograph.

Thank you to the Laurier Military History Archive for making these images available on the web and allowing researchers to use them!

I apologize if this is old news, but I was just made aware that Library and Archives Canada finished digitized their “ZK” prefixed photos. Taken between WWII and the mid-1960s, the collection includes over 3,600 colour images of the Canadian Army. More information on the collection is available here and a finding aid is also online.

There’s a lot of images to go through but I did manage to find, among others, some relevant to my research.

One of a series of photos of two members of the Veterans’ Guard of Canada posing for photos. The Veterans’ Guard was primarily composed of WWI Veterans who acted as a “Home Defence” force and guarded PoW camps across the country.

One of a series of photos of German soldiers captured during the Normandy Invasion. Quite possible that some, if not most, of these men ended up in Canada for a couple years. You can find the story of one of these PoWs, Richard Beranek, who ended up in a lumber camp in Manitoba here.