As of yesterday afternoon, my exhibit is up and running without any hitches! As I was going through my images, I found that I still had some that I hadn’t shown yet.

One aspect that I wanted to show in some detail was the interior of the buildings. This, however, is rather complicated as, for the most part, I have no idea what the interiors looked like. That being said, the architectural plan that I had for my bunkhouse provides a sense of the interior layout and I tried my hand at a re-creation.

I did include a brief interior view in the previous version of my model but I had used some stereotypical bunkbeds obtained from Sketchup’s Warehouse. As I was going through my photo archives, I rembered that I had a photo of the bunkbeds at Riding Mountain, taken while the camp was under construction and the bunkbeds were stacked outside. From this, I was able to create the model below. The texture for the bedding was adapted from a photograph of a WWII Canadian-army issue blanket. 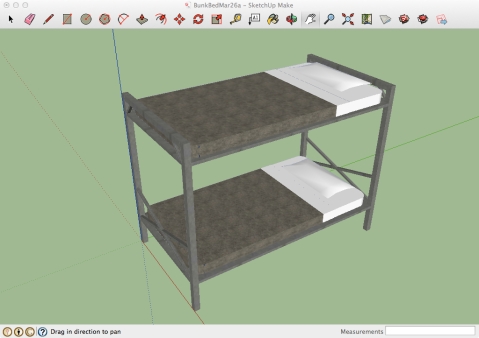 Another building that I had some information about was the mess hall. In a recently acquired collection of photographs from the PoW camp in Sherbrooke, Quebec, I have a picture of the interior of the same type of mess hall used at Riding Mountain. Making some estimations regarding the dimensions, I built myself a basic table and bench. I also cropped out a not-so-happy PoW and included him in the model to provide some sense of scale. 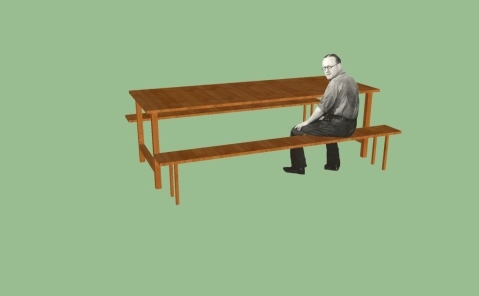 Stay tuned in the next few days as I post some images of the final stage of my model!