Interactive Exhibit – Details are the Devil

While I knew I wanted to add some detail to my model, I had to narrow down what would be noticeable and, arguably more important, what I was actually able to model.

While they may not be the most glamorous or exciting, clothes lines were a necessity and they camp and they also offered me the opportunity to show off some of the uniforms and other items of clothing the PoWs would have been wearing at the camp. Fortunately, I did some research at the Canadian War Museum a few years ago and photographed, among others, some PoW uniforms with their distinctive red “target” on the backs. After a little bit of work, I was able to come up with this:

As wood-carving was a popular activity at the camp, some of the PoWs tried their hand at building their own furniture and garden fences to decorate their bunkhouses. From historic photographs of the camp, I was able to re-create some of the benches and fences that welcomed visitors to the PoW bunkhouses. Combined with the clothes lines, I think they help give a better sense of what the camp looked like in 1944.

Another aspect that was missing from my previous model was signs of any trees at the site. While nearly every tree around the camp had been removed in an effort to reduce the danger of a forest fire, the Parks Bureau wanted spruce to regenerate in the area and therefore a number of spruce trees were spared the axe. Luckily, I can make out the position of most of these trees from the aerial photograph and, using an existing model from Sketchup’s Warehouse, this is how it turned out! 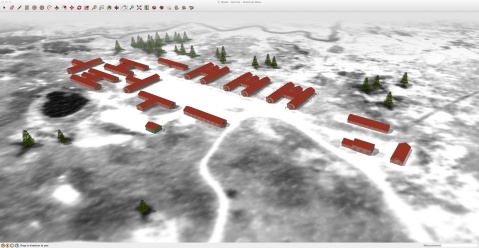