As some of you know, I collect almost anything related to PoWs in Canada and among the most numerous objects in my collection are PoW postcards and pictures. For most of the war, PoWs were authorized to write up to four postcards and two letters a month and were allowed to receive unlimited quantities of mail and parcels. As this was the only method to keep in touch with friends and family in Germany, letter-writing took up a prominent portion of a PoWs’ recreation time and many eagerly awaited news from home.

For me, one of the most interesting aspects of PoW mail was the picture postcard. Taken by pre-approved photographers, these photos not only allowed PoWs to show their families they were alive and well but they also served as a form of propaganda in that they demonstrated that Canada was able to treat their PoWs well within the terms of the 1929 Geneva Convention.

Today, I’m going to show a postcards that I added to my collection this summer. This particular postcard was sent by Maschin Obergefrieter. Helmut Schöttler, who was a member of the Kreigsmarine (Navy). The reverse of the photographs provide some, but very limited, identification information. This includes their name, PoW number, rank, branch of service, and the camp they were interned in. 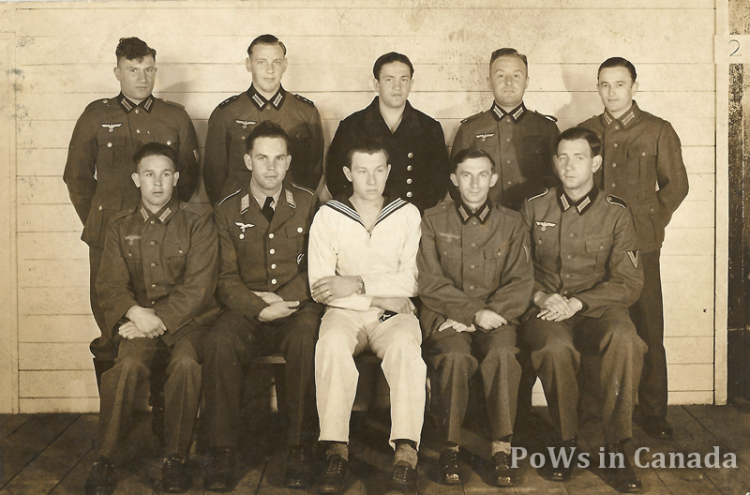 The above photograph was taken at Camp 21 at Espanola, Ontario. Camp 21 opened in 1940 and was located on the site of the former Abitibi Power and Paper Co. Mill. Of the ten PoWs in the photo, at least six are Navy while it appears there are at least two Army personnel and one Paratrooper. The sender of the photo, Helmut Schöttler, is the somewhat unhappy individual in the white Navy uniform.

As I’m very interested in the stories of individual PoWs and how they experienced internment in Canada, I’m always looking for more information on these PoWs. Unfortunately for me, the vast majority of personnel files of PoWs were destroyed after the war which usually means that I can’t really find out a whole lot about these men.

This time, however, was an exception! Thanks to the hard work of some very dedicated individuals, the history of German U-Boats is among the best documented aspects of the German military online and a quick search revealed that Helmut Schöttler served on U-93. Launched in June 1940, U-93 completed seven patrols and sunk a total of eight ships. Her luck, however, ended in January 1942, when she was discovered by a British destroyer and sunk (thanks to the dedicated volunteers at uboat.net, I can even see Schöttler’s final voyage aboard U-93!).

Forty of the forty-six crewman were picked up by British ships, including Schöttler. Following their interrogation in Britain (see report here), many, if not all, of the new prisoners were sent to Canada for the duration of the war. Coincidentally, this is my second picture postcard of a U-93 crewman; the first was sent by Hans Alsleben and can be seen here.

2 thoughts on “Starting With a Photograph…”