This week, we were asked to comment on online map archives and they methods and tools they have used to digitize their collections. As I’m becoming more and more interested in using mapping software, I thought I would briefly examine some of these archives and the resources they offer to those studying history.

From a Canadian history standpoint, David Rumsey’s Historical Map Collection provides a fantastic resource for large-scale maps that essentially cover the globe. However, this also means that they do not have, or at least haven’t digitized, significant numbers of smaller scale maps, other than some important cities (Toronto, for example). This, however, is where the local archives fill the gap.

In the examples of local and University archives that I examined, maps of the city or region have often been accessible. Western University’s Map and Data Centre is an excellent example of this with digitized fire insurance maps and aerial photographs of London. However, the majority maps and photographs of areas outside of the London boundaries remain undigitized.

However, not every University or local archive specifically follows this trend. An excellent example of this is McMaster University’s fantastic collection of British and Canadian World War I Trench Maps and Aerial Photographs. For Professor Vance’s course on the First World War last year, I wrote a bibliographic essay on two of my great-great uncles who were killed in the First World War. Although I knew the general location of where my relatives were wounded (one at Vimy Ridge and the other near Cambrai), I wanted to see if I could use my various sources to provide a better understanding of where my great-great uncles were wounded and, as both died from their wounds, their evacuation to clearing and field hospitals.

I was then able to overlay these maps over Google Earth’s satellite imagery, matching up some of landscape features. Google has allowed this feature to be fairly simple to use and with some minor adjustments, I was able to roughly align these maps to the current footage. I should also note that you can also fiddle with transparencies which allows you to see the historical and modern landscape. 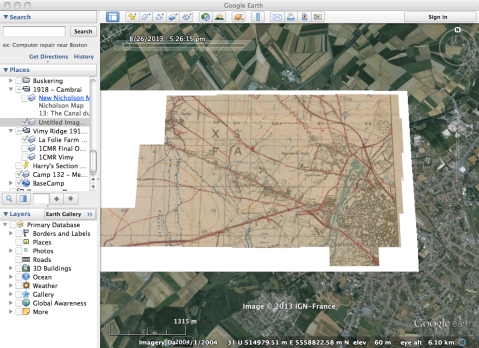 The next time I’m in France, I will now be able to walk where my great-great uncles were wounded almost one hundred years ago.

For more overlay maps, the David Rumsey Map Collection has uploaded over 120 maps, which are available for viewing here.