Postcard from Malte Sacolowsky, U-501

Last week I posted about “Real Photo” picture postcards sent home by PoWs interned in Canada. Today, I’d like to focus on one of those postcards and share a little more about one of the men featured in it.

In the seventy years that have passed since these postcards were mailed, the provenance of many of the postcards in my collection has been lost. While the bonus of postcards is that usually the sender’s name is on the reverse, they didn’t usually need to point out to their friends and family who they were, leaving me to try and determine who they are by their uniforms and ranks. Sometimes this works, othertimes, like in this case, it doesn’t. While I may never identify “Malte Sacolowsky” in the photograph below, the digital age in which we live in has provided me with a bit of his life history. 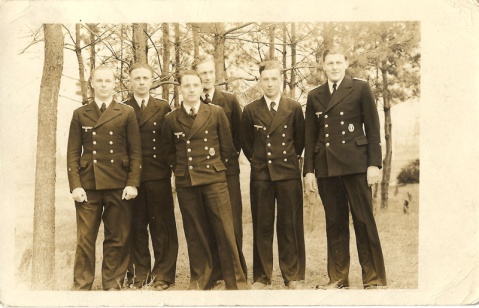 The folks at the U-Boat Archive have made many of the British interrogation reports of captured U-Boats available online. It was in one of these reports that I found Sacolowksy.

German U-boat U-501 left Norway on August 7, 1941, en route to its first war, and subsequently last, war patrol. On September 5, 1941, U-501 sunk a Norwegian merchant ship but its success was short-lived. On September 10, 1941, south of Greenland, the Canadian corvette HMCS Chambly picked up U-501 with sonar and attached the u-boat with depth charges. The sub was damaged and the captain decided to scuttle. HCMS Moose Jaw then unsuccessfully attempted to ram her as she surfaced. A Canadian crew attempted to board the submarine but was unsuccessful in its attempt to seize any documents from the sub before she sunk. Thirty-seven German crewman were captured in what was the Royal Canadian Navy’s first U-Boat “kill” during the Battle of the Atlantic.

The interrogation report of U-501 describes the crew:

Of the six officers, fifteen petty officers and twenty-six men forming the complement of “U 501,” only the engineer officer, four petty officers and two ratings had ever made a war cruise prior to “U 501’s” first and last cruise. Most of the men were very young, the youngest being seventeen years of age, hastily and most inadequately trained, and almost completely inexperienced; they expressed their disillusionment regarding their life and active service in a U-Boat, which had been described to them in the glowing lies of the recruiting authorities.

Among the thirty-seven prisoners was nineteen year-old Malte Sacolowsky. The interrogation report, while not mentioning him specifically by name, was one of the “young midshipmen” described below:

“The other two officers were young midshipmen, who joined the Navy on 1 December, 1939. Apart from their training they had had no naval experience and had volunteered for U-Boats; their suitability for this branch of the service was being tested. They were both typical products of the Hitler Youth organisation – fanatical, stupid, conceited and poorly educated.”

Sacolowksy eventually ended up in Camp 30 in Bowmanville, Ontario but what happened to him after that, I’m not sure. Regardless, I find postcards – these seemingly insignificant artifacts – to be fantastic sources for research. Placing the men pictured in the photograph into context provides us with a better sense of just who these men were. Now to find out what they thought about internment in Canada…

The rest of the interrogation report can be found here.

More information about U-501 is available here at uboat.net.

Starting With a Photograph…

As some of you know, I collect almost anything related to PoWs in Canada and among the most numerous objects in my collection are PoW postcards and pictures. For most of the war, PoWs were authorized to write up to four postcards and two letters a month and were allowed to receive unlimited quantities of mail and parcels. As this was the only method to keep in touch with friends and family in Germany, letter-writing took up a prominent portion of a PoWs’ recreation time and many eagerly awaited news from home.

For me, one of the most interesting aspects of PoW mail was the picture postcard. Taken by pre-approved photographers, these photos not only allowed PoWs to show their families they were alive and well but they also served as a form of propaganda in that they demonstrated that Canada was able to treat their PoWs well within the terms of the 1929 Geneva Convention.

Today, I’m going to show a postcards that I added to my collection this summer. This particular postcard was sent by Maschin Obergefrieter. Helmut Schöttler, who was a member of the Kreigsmarine (Navy). The reverse of the photographs provide some, but very limited, identification information. This includes their name, PoW number, rank, branch of service, and the camp they were interned in.

The above photograph was taken at Camp 21 at Espanola, Ontario. Camp 21 opened in 1940 and was located on the site of the former Abitibi Power and Paper Co. Mill. Of the ten PoWs in the photo, at least six are Navy while it appears there are at least two Army personnel and one Paratrooper. The sender of the photo, Helmut Schöttler, is the somewhat unhappy individual in the white Navy uniform.

As I’m very interested in the stories of individual PoWs and how they experienced internment in Canada, I’m always looking for more information on these PoWs. Unfortunately for me, the vast majority of personnel files of PoWs were destroyed after the war which usually means that I can’t really find out a whole lot about these men.

This time, however, was an exception! Thanks to the hard work of some very dedicated individuals, the history of German U-Boats is among the best documented aspects of the German military online and a quick search revealed that Helmut Schöttler served on U-93. Launched in June 1940, U-93 completed seven patrols and sunk a total of eight ships. Her luck, however, ended in January 1942, when she was discovered by a British destroyer and sunk (thanks to the dedicated volunteers at uboat.net, I can even see Schöttler’s final voyage aboard U-93!).

Forty of the forty-six crewman were picked up by British ships, including Schöttler. Following their interrogation in Britain (see report here), many, if not all, of the new prisoners were sent to Canada for the duration of the war. Coincidentally, this is my second picture postcard of a U-93 crewman; the first was sent by Hans Alsleben and can be seen here.