Having presented our exhibits to the class this past Wednesday, we were asked to provide a brief reflection on our projects. While I was happy with how it turned out, there are definitely some things I’d like to change for any future versions. 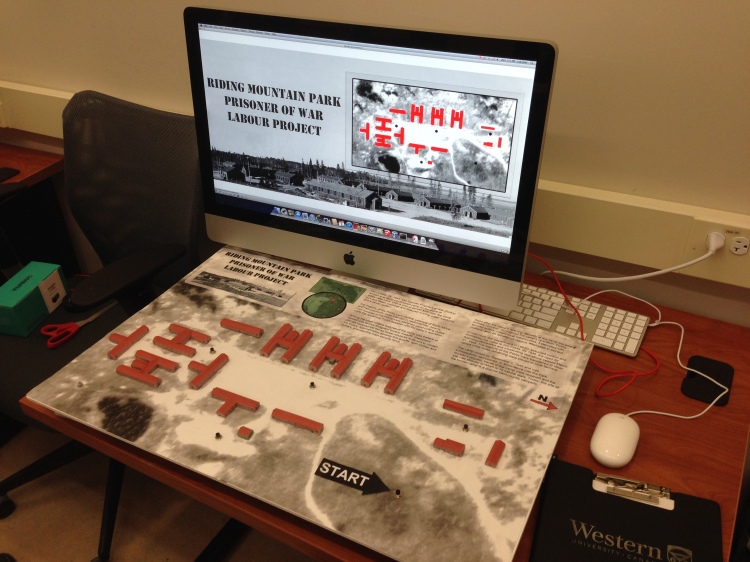 On the physical model, I think a list of the buildings would have helped viewers orient themselves to the layout of the camp. While each of the buildings are mentioned in the video, I’m not sure that it was clear which building the video was talking about.

One of the difficulties I encountered was the limited amount of time I had to share the history of the PoW camp. With the Makey-Makey, I was limited to five buttons and I just wasn’t able to tell as much as I would have liked in five videos (totaling five minutes).

As for my model, I found that Sketchup, or at least the computer I was using, was not able to handle the detail I had hoped to include. As I added more features to the model, I noticed that SketchUp began to slow down considerably. For example, turning on the shadow feature caused the computer to take a significant time to load an individual scene, and trying to export a twenty second video with shadows would have taken about twelve hours. Needless to say, I opted for the shadowless option, which only took five minutes!

While not the easiest of tasks, I would have liked to import the model into a better engine, perhaps something like the CryEngine. As the creators of this model of 17th Century London have demonstrated in the historic reconstruction of London, it definitely has the potential to bring the camp to life! However, I have a feeling that would require quite a bit of work.

Nonetheless, I hope that I’ve demonstrated one rather simply way of exhibiting a historic site that no longer exists!