Captured in North Africa, Kurt Siebein was sent to Canada in September 1942. Likely disembarking in New York, after a long train journey, he and his fellow PoWs arrived at Camp 133 at Ozada, Alberta. A temporary tented camp at the foothills of the Rocky Mountains, Ozada held thousands of German PoWs while the new internment camp at Lethbridge was being constructed. While a scenic location for an internment camp, the camp was not without its problems. Life in tents during a particularly wet summer and then in the early months winter – the first Canadian winter for many of the PoWs – was far from ideal. However, by late November 1942, the new camp at Lethbridge was completed and the PoWs were transferred there by December. 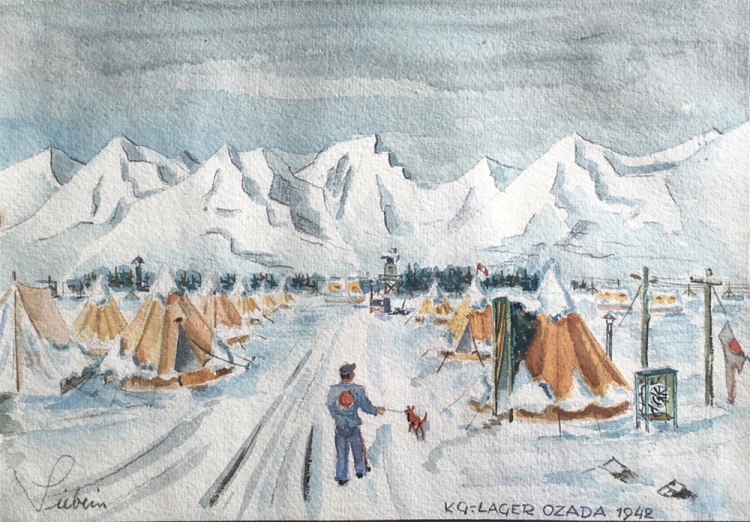 An artist, Siebein painted this watercolour during his brief stay at Ozada. “K.G.-Lager Ozada 1942” (K.G.-Lager referring to Kriegsgefangenenlager, German for prisoner of war camp) shows life at Ozada in that final month before the transfer to lethbridge. A single PoW is visible, with the red circle on his jacket and the red stripe on his trousers marking him a PoW, walking his dog down a line of tents. A single guard tower and the Rocky Mountains feature prominently in the background.

This particular painting was sold or traded to Hans Gronenburg, a PoW from the Luftwaffe who arrived in Canada in 1940 and was transferred to Ozada in June 1942.

While I have yet to uncover more examples of Siebein’s paintings, it appears as though he continued painting throughout his internment in Canada. His pay record shows he sold a number of watercolour and oil paintings at art and craft sales in 1945, netting him $24.50, but this does not account for any sold or traded to his fellow PoWs. Siebein spent most of his time in Canada at Lethbrigde but spent the summer of 1946 employed on farmwork. He was transferred to Great Britain on November 24, 1946.

If anyone as any other examples of Siebein’s art or any other PoW art, please get in touch!