As some may have noticed, I’ve neglected my blog as of late, with only one post in the last two months. This, I assure you, was not intentional but instead the result of me having been on the road for most of that time. Now, 12,000 kilometers later, I have returned to London following the completion of the first stage of my dissertation research. Here’s what I’ve been up to.

Because PoWs were scattered across the country, I knew from the beginning that my research would take to me to archives and museums as far west as Alberta and as far east as Quebec, and possibly New Brunswick. In late May, I drove back home to Manitoba and, after a few days there, continued on to my first stop, Medicine Hat. As some may know, Medicine Hat was once home to Camp 132, one of Canada’s two largest PoW camps, with a capacity of over 12,000 prisoners of war. As I have another post lined up about the fate of Camp 132 and its current state, I’ll save a better description of the camp for then.

My research began at the Archives of the Esplanade Arts & Heritage Centre, which has a number of volumes and records relating to the history of PoWs in Camp 132. Among the most useful of these records were those donated by former PoWs, providing valuable insight into life behind barbed wire. Having unexpectedly finished my research here in a single day, I spent part of the following day touring the Medalta factory in Medicine Hat’s historic clay district. Medalta, within a couple kilometres of the camp, was one of the Medicine Hat businesses to take advantage of PoW labour.

My next stop was Lethbridge, where the other largest PoW camp, Camp 133, was once located. Sadly, a plaque is the sole reminder of Camp 133 for, unlike Camp 132, all of the buildings were destroyed or removed from the site in the last seventy years. While the camp is no more, the Galt Museum and Archives preserves its history. Here I encountered a large number of photographs of Camps 132 and 133 as well as PoW memoirs and records pertaining to the camp’s disposal.

As the archives were generally closed for the weekends, I had little choice (hah!) but to head to the mountains! I spent my first weekend at Waterton Lakes National Park. As the nights were still cool and the kids still in school, the park was relatively quiet. Fortunately, the rain confined itself to the evenings, leaving me to explore some of the great hiking trails the park has to offer. While I thoroughly enjoyed my hiking here, I have to say that the Crypt Lake trail was certainly my favourite. Totaling 17.2km, not including the fifteen minute boat ride to the trailhead, the trail takes you up 700m through a lush valley flanked by mountains on either side. Enjoying the spectacular views as you make your way to Crypt Lake, you can see why it was listed “Canada’s Best Hike” in 1981. As you approach the lake, you climb up a short ladder, make your way through a short tunnel carved into the mountain, and then walk along a narrow path with a sheer drop into the valley below. Well worth the trip for anyone thinking about heading to Waterton Lakes!

The following Monday I had to make it back to Calgary by the evening but decided to take the scenic route via Fernie and Kootenay National Park. I briefly flew back to the Winnipeg for the conference on Civilian Internment in Canada and I hope to have another post summing up my time there.

As luck would have it, when I returned to Calgary on Saturday, I was able to pick up two PoW paintings from Lethbridge’s Camp 133 before heading to Banff for the weekend. Along the way I stopped at two former PoW camp sites, Camp 130 – Seebe (also referred to as Camp K or Kananaskis), where one of the only remaining PoW guard towers in the country is still standing. Once the Kananaskis Forest Experiment Station, the site is now home to the University of Calgary’s Barrier Lake Field Station. I also stopped at the former site of Camp 133 – Ozada, now an open field along the south side of the Trans Canada highway, which actually cuts across part of the former camp site.

The next few days were spent hiking around Lake Louise and up to the Wilcox Pass, which provides a stunning (albeit chilly) view of the Athabasca Glacier.

As I was technically supposed to being doing research on this trip, I returned back to Calgary to spend some time at the Glenbow Museum Archives. I was then off to Edmonton to the Provincial Archives of Alberta and the Royal Alberta Museum (RAM). The RAM, now home to the Robert Henderson PoW Collection, provided me with some great sources and leads, some of which I’ll post soon! On the drive home, I stopped and viewed the second remaining guard tower at the former site of Camp 135 – Wainwright, completing my tour of internment camps in Western Canada. 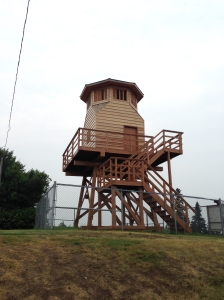 Following my return to Manitoba, I took a trip to Pine Falls to see if I could find any remains of the Manitoba Paper Company’s lumber camps. From 1944 to 1946, the Manitoba Paper Co., a subsidiary of the Abitibi Pulp and Paper Co., employed POWs at at least four of its camps. Braving bears, wolves, mosquitoes, and black flies, my sister and I hiked along an old logging roa in search of the camps. While the hike was broken up by some lovely Eastern Manitoba scenery (see below), at a mere two and a half kilometres from a camp, we were halted in our search by the efforts of some rather productive beaver. At some point in the last seventy years, they had managed to damn off a creek that expanded a marsh over the road. Attempts at bushwhacking around was to no avail and out of time, we were forced to turn back. The trip was not a complete waste for, if nothing else, I quickly learned why PoWs in the bush despised black flies. 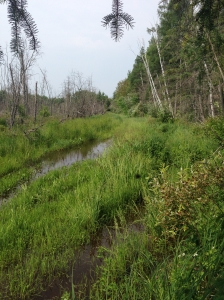 And the trail disappears…

Making my way back to Ontario, I spent two nights camping at Neys Provincial Park. While the chance to camp on the Shore of Lake Superior is reason enough to visit the park, it has the added bonus of once having been the site of Camp W or Camp 100. Here about four hundred PoWs waited out the end of the war while another few hundred were employed in a number of nearby logging camps operated by the Pigeon Timber Company.

Neys Provincial Park – PoW camp was located in the area behind where I took this photo.

Now for the next phase of research, Ottawa!