Picture postcards were quite popular with PoWs as it offered them a chance to show  their families how they were doing as they waited out the end of the war in Canada. As these photographs were taken by photographers approved by the Canadian military, they also served an important propaganda by demonstrating that the prisoners were being properly fed, clothed, and housed. 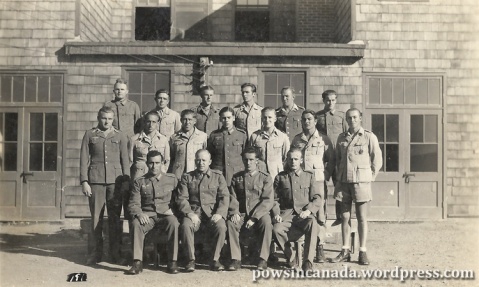 This particular photograph was taken at Camp 132 in Medicine Hat, Alberta in 1943. Both Heer (Army) and Luftwaffe (Air Force) are present and the tropical (light-coloured) uniforms worn by a number of the PoWs suggest that some, if not most, of these men were captured in North Africa.

The sender, Heinz Gummert, is not identified in the photo but was a young Luftwaffe Obergefreiter (Lance Corporal) believed to have been captured in North Africa. The postcard, addressed to his father in Germany, simply states “Greetings to you from your son, Heinz!” Coincidentally, the PoW in the back row, third from the left, was a PoW at Riding Mountain but he too remains unidentified.

I know little about Gummert but, a few months after this photograph was mailed, he was working at a lumber camp near Hemlo, Ontario. In mid-April, he and two comrades attempted to escape from the camp. The Winnipeg Free Press of April 15, 1944 briefly described their capture:

“The Royal Canadian Mounted Police here revealed today that three German prisoners of war who escaped Friday from a prison camp, at Hemlo in northern Ontario were recaptured in the same general vicinity late yesterday. The prisoners were Robert Traut, 31, Heinz Gummert, 21, and Kurt Senmholz, 35. The three were former members of the Nazi air force.”

Hopefully some further research will uncover Gümmert’s identity and his fate following the failed escape.

2 responses to “Postcard from a Future Escapee – Heinz Gummert”